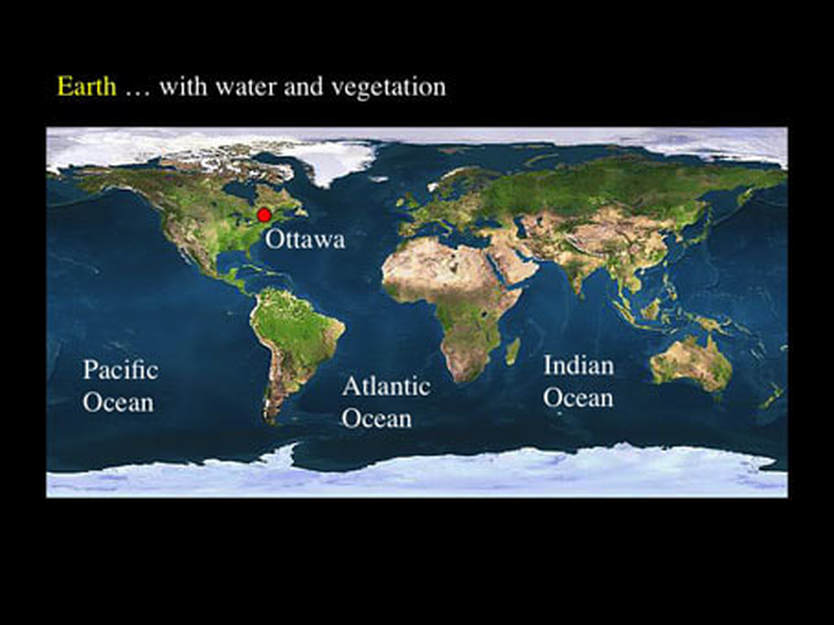 Basically, it all comes down to heat and water. Let’s look at the Earth first. This is how we usually see our planet, with its oceans full of water and forest cover on its continents. 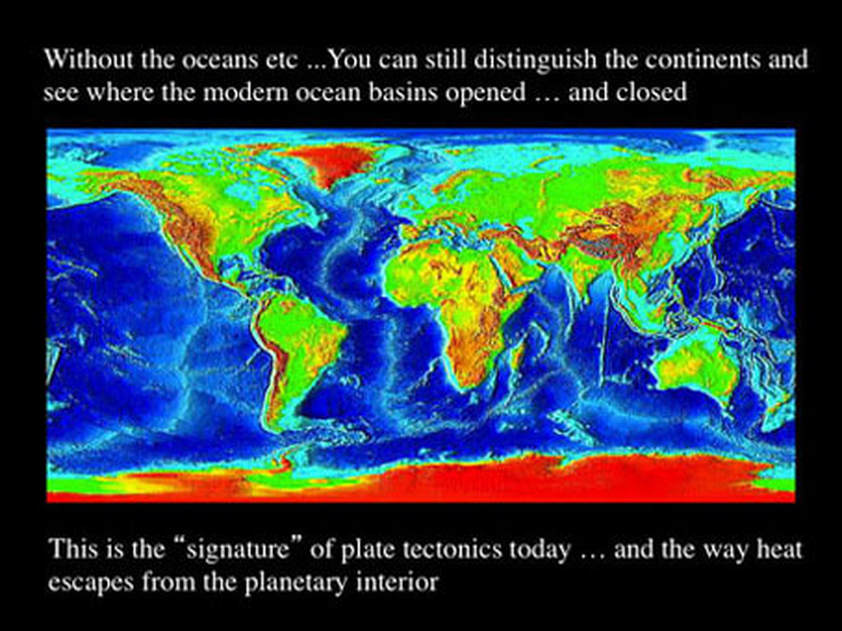 But if you take the water and plants away, we see much more. You can still see ocean basins (blue) and continents (green and beige), but you can now see the extensive system of mid-ocean ridges that are long skinny mountain chains in the ocean basins that mark where hot magma (molten rock) erupted at the surface to create new ocean floor as the continents drifted or spread apart (notice how you can still fit Africa and the Americas back together again), and you can see the mountain chains of the Cordillera and the Andes in red along the west coast of the American continents where the ocean floor dives down or subducts beneath the continent. You can also see the Himalayas that formed where the Indian subcontinent collided with the rest of Asia

This picture is the typical planetary signature of what’s called “Plate Tectonics”, the process of continental drift. This particular image only records the scars left by plate tectonics for the past 200 million years. Before that there was no Pacific Ocean, no Africa, no America, but there were other oceans and other continents. The important thing to understand is that plate tectonics is the dominant way the Earth as a planet cools its interior.

This is very important for planetary geology. You’ll remember the argument that Lord Kelvin put forward in the late 19th century when he calculated that the Earth started life with heat due to its growth by  planetissimal accretion and cooled by simple conduction. According to Kelvin, the Earth was no older than a few million to 100’s of millions of years; he was wrong! The Earth is 4.5 billion years old. What Kelvin didn’t know about was radioactivity. Rocky planets contain radioactive elements such as U (breaks down to Pb) and K (breaks down to Argon). Radioactive breakdown releases energy, that turns into heat. These radioactive breakdown reactions generate new heat inside planets like the Earth, so if they don’t have an efficient cooling mechanism and they accumulate that heat inside, the planetary interior can get so hot that it can melt with catastrophic consequences! 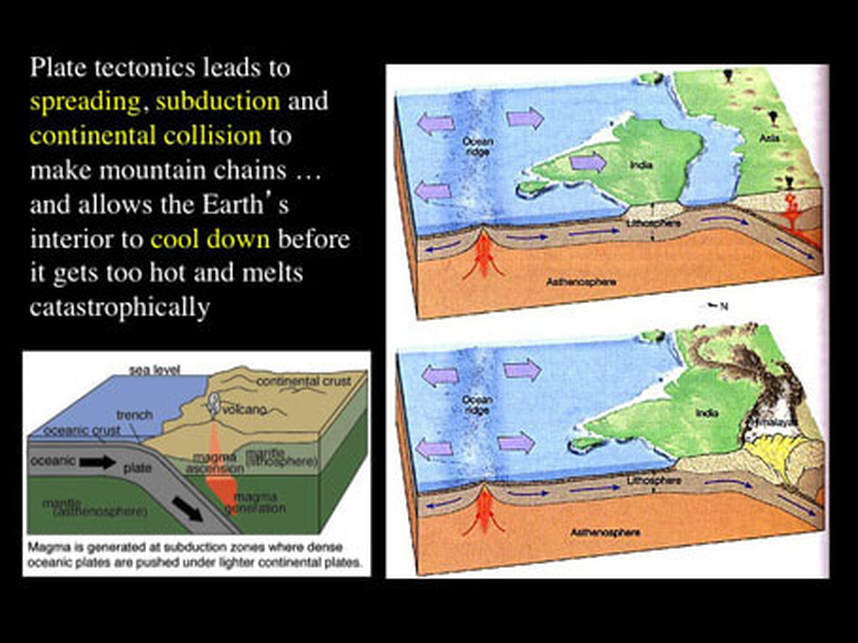 So here’s a summary of how heat is lost at the mid-ocean ridges where the hot interior rises as the ocean floor spreads away to either side, how the subduction of the ocean floor beneath the edges of continents gives rise to volcanoes and mountains, and how continents can collide to form mountain chains from the rocks squeezed between them. 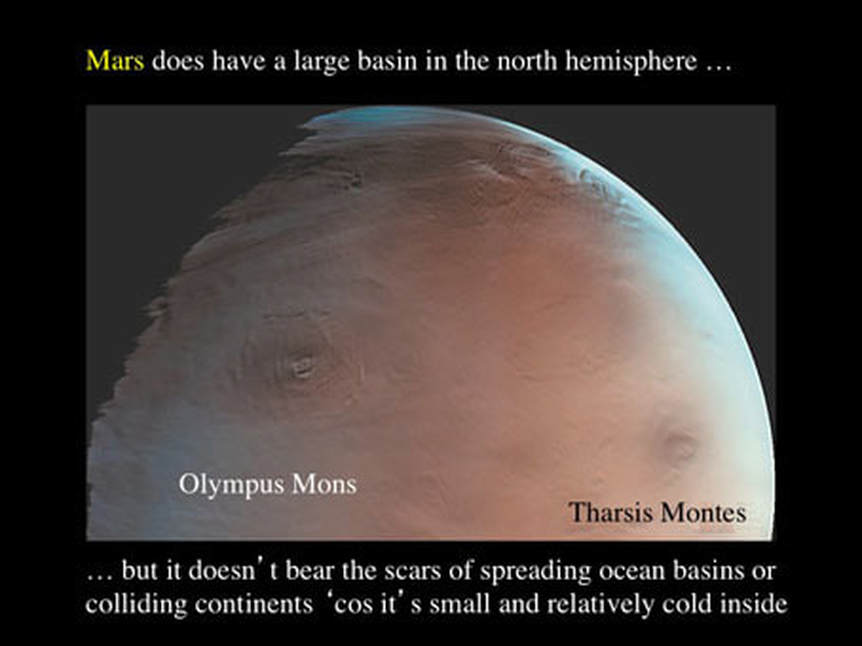 Now look at this picture of Mars; it’s got some very large volcanoes, but no sign of the plate tectonic “signature”. 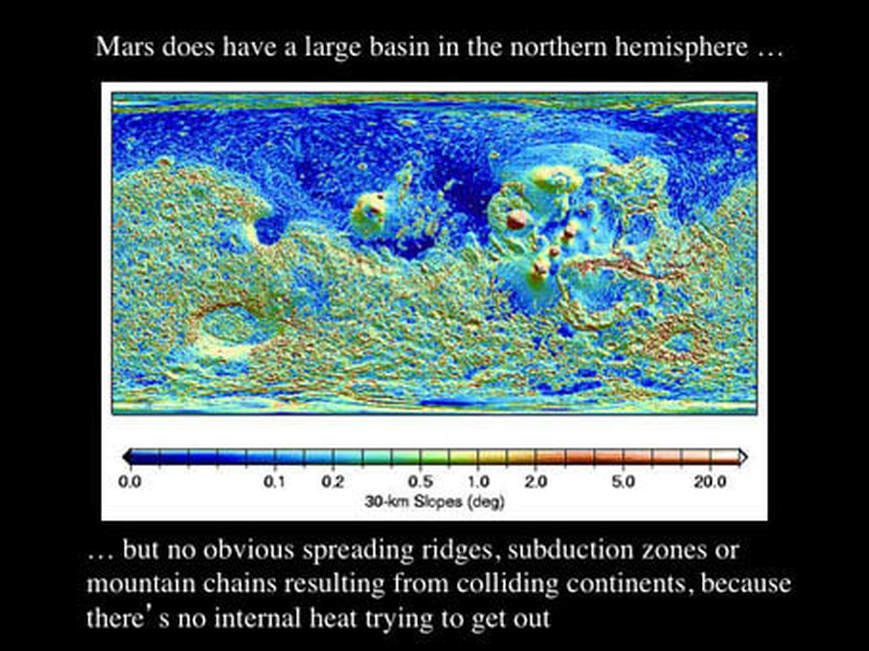 Although it has a large basin in the northern hemisphere, there are no mid-ocean ridges marking spreading and opening of the basin floor, and no mountain chains along the margins of the highlands where subduction might have occurred. Why not? : because Mars is only half the size of the Earth and it cooled down a long time ago. In other words there╒s very little heat trying to get out so it doesn’t need a cooling mechanism like the Earth does. 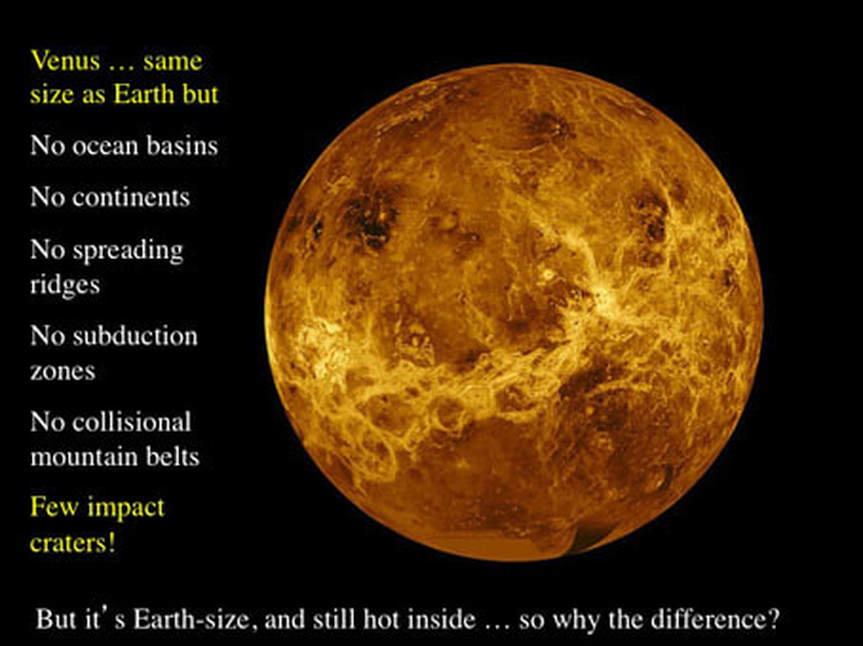 But what about Venus? As Earth’s twin it’s about the same size, and because it has a very similar density, most planetologists think it is made of similar rocks to those that make up the Earth. But look at this planetary view : no ocean basins, no continents, no spreading ridges, no subduction zones, no collisional mountain belts, and very few impact craters! If Venus is made of the same stuff as the Earth, it probably contains radioactive elements that produce heat. So why doesn’t it look geologically like the Earth? 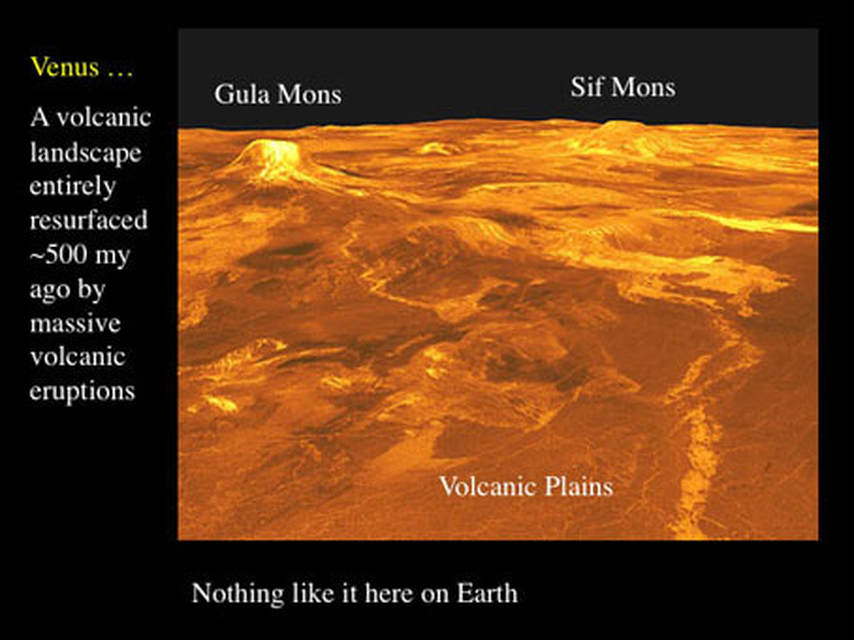 Let’s move in a bit closer and take a look. 80% of the Venusian surface is made of gently rolling volcanic plains, dotted with large isolated volcanoes. The statistical study of impact craters suggests that the Venusian surface is no older than 500 million years. In other words, it was completely resurfaced by massive volcanic eruptions that covered all the older craters at about the time that the first fossils were forming here on Earth. 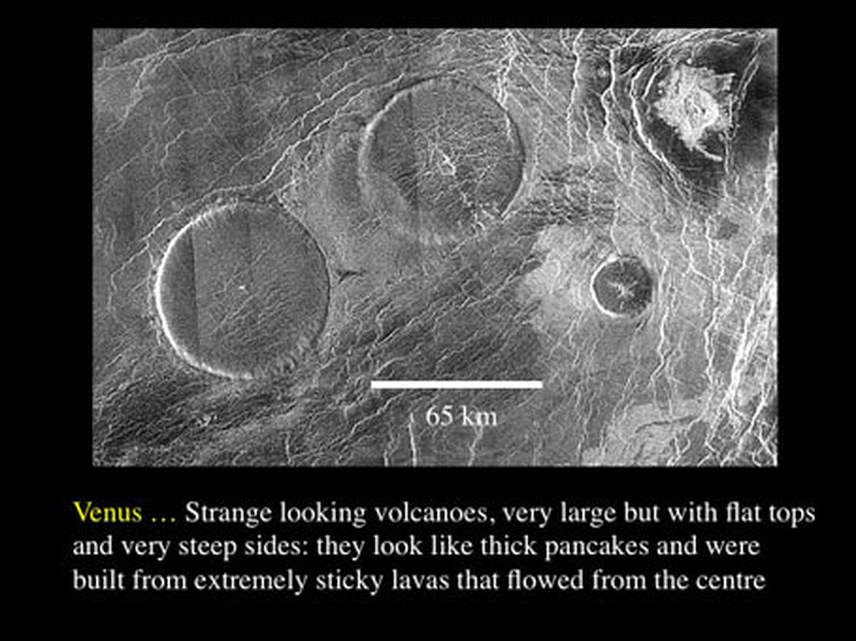 Venusian volcanoes are rather peculiar, compared with those on Earth. Here are two large ones with very flat tops and very steep sides, about a kilometre high. They look like pancakes and must have formed when very stiff and sticky lava flowed out from the central vents you can still see, otherwise the sides wouldn’t be so steep. 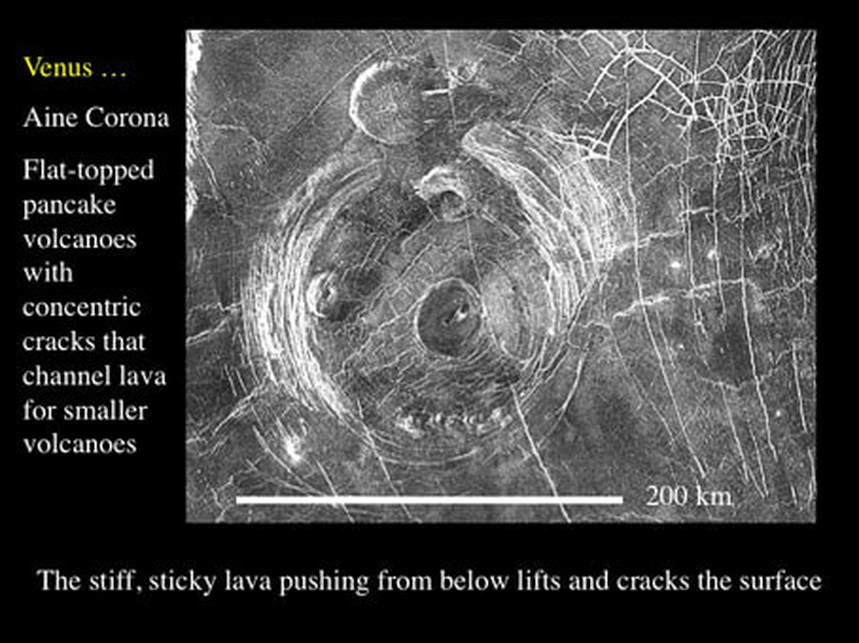 In this example, the stiff, sticky lava beneath the volcano has pushed the crust up and cracked it over an enormous area ... 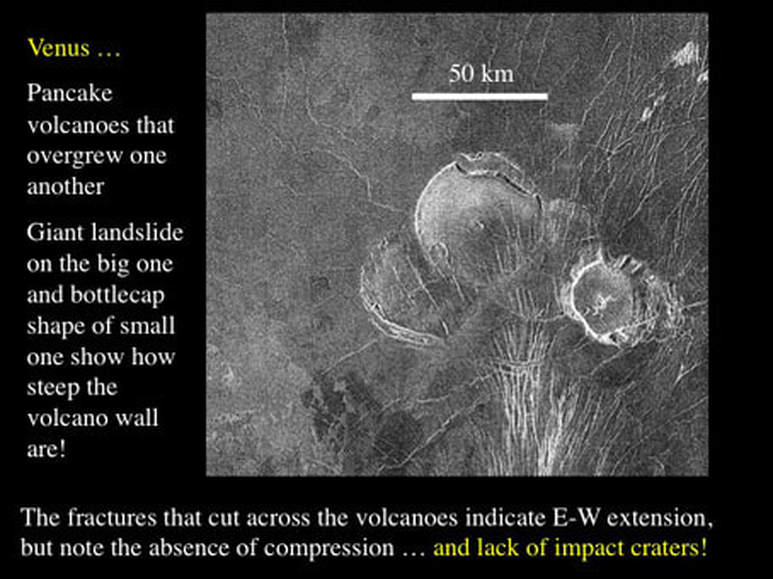 ... and in this case the edges of the pancakes were so steep that giant landslides occurred on the north side of the big one, and formed a bottle cap shape from the smaller one. Again, notice the lack of impact craters in this picture! 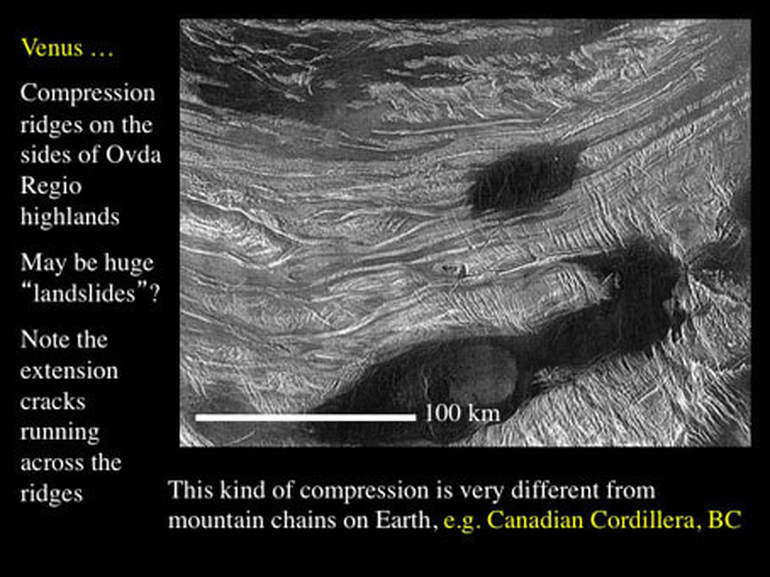 There are long ridges on Venus that, at first glance, look rather similar to mountain chains on Earth ╔ but they are not! These are the so-called Tesserae terrains. To be honest, no-one actually knows how they form, but in this example the compressional ridges form on the sides of an area of highlands and are associated with extensional fractures that cut across the ridges at a high angle. Most importantly here, there is a change in altitude of a kilometre or so across the compressional belt. This could represent sliding of material down near-surface slopes (something like a giant landslide), perhaps due to uplift of the highlands, rather than a mountain belt related to subduction or the collision of continents. 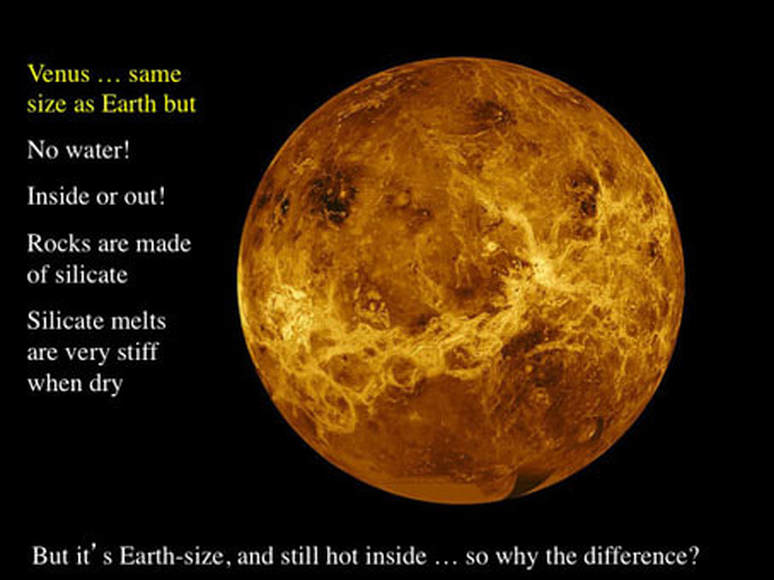 ​So why is Venus so geologically different to its sister planet Earth? There are a number of hypotheses, but the one that makes the most sense to me says that Venus has no water, either in its interior or on the surface, and this is the critical difference between it and the Earth. Rocks are made of silicate minerals like quartz, feldspar, olivine and pyroxene. Silicate lavas are very sticky and stiff when they are dry, but flow like treacle when they are wet, so the dry lavas on Venus build the pancake volcanoes we just looked at. Solid rock can also flow, if it is hot enough and given enough time, but if the rock is very dry,  it’s very strong and stiff and can hardly flow at all. 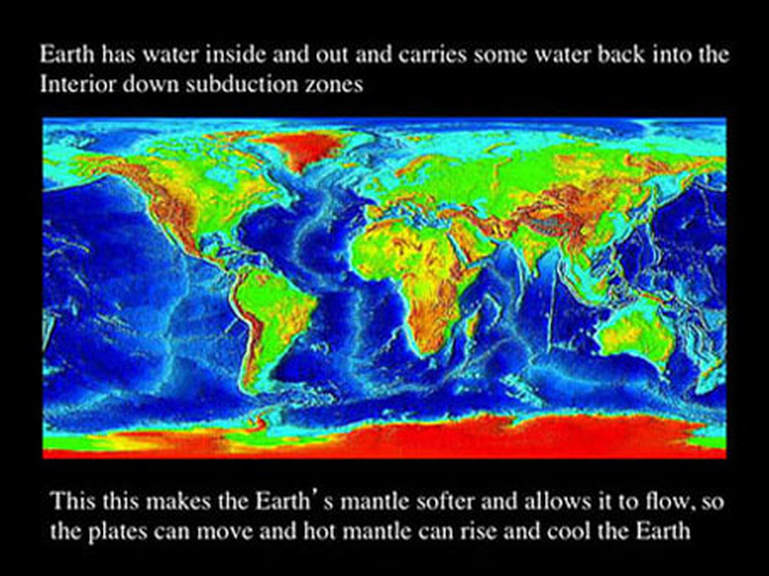 Planet Earth has water at the surface that gets carried into its warm interior by the ocean floor material that slides down the subduction zones at the edges of the continents. This makes the Earth’s interior soft enough to flow, thereby allowing the plates to move and letting hot mantle material rise up under the mid-ocean ridges. The consequence of this is that the Earth’s interior is able to cool, albeit very slowly. 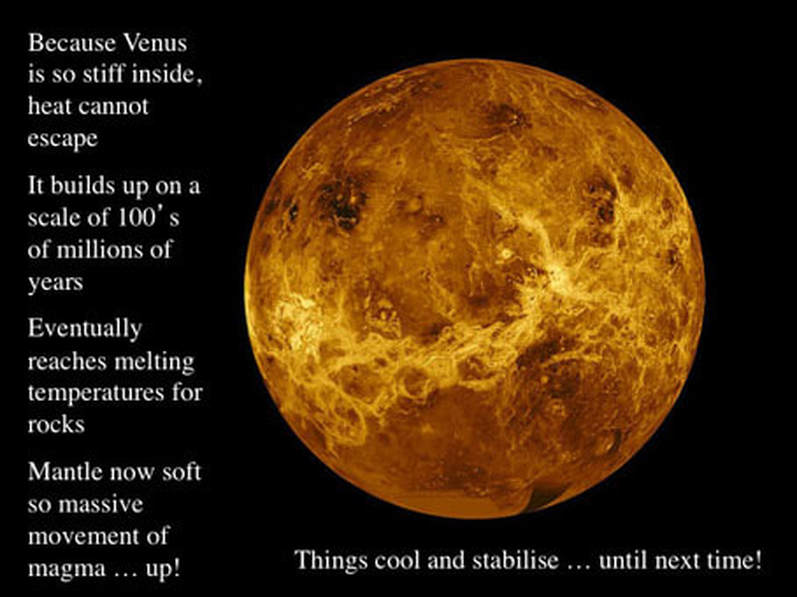 But dry Venus, with its stiff interior cannot flow, so plates can’t move and heat cannot escape. The heat builds up on a time scale of 100╒s of millions of years until the upper part of the interior melts. Molten lava, even dry, is still softer than solid dry rock, so a catastrophic upward movement of lava can take place and quickly resurface the entire planet in a geologically short time. This catastrophic turnover of the upper part of the planetary interior allows heat to escape. Things cool off  and stabilise and the planetary interior returns to its normal strong, stiff state that cannot flow fast enough to allow tectonic plates to move around. Meanwhile, radioactive heat continues to be produced until the next catastrophic event occurs 100╒s of millions of years in the future. So the next time you are peering at the cloud tops of Venus through a telescope, remember that the planetary geology hidden from view is very different from what we see on Earth, and mostly because there’s not a drop of water to be found anywhere on the planet - inside or out!
back