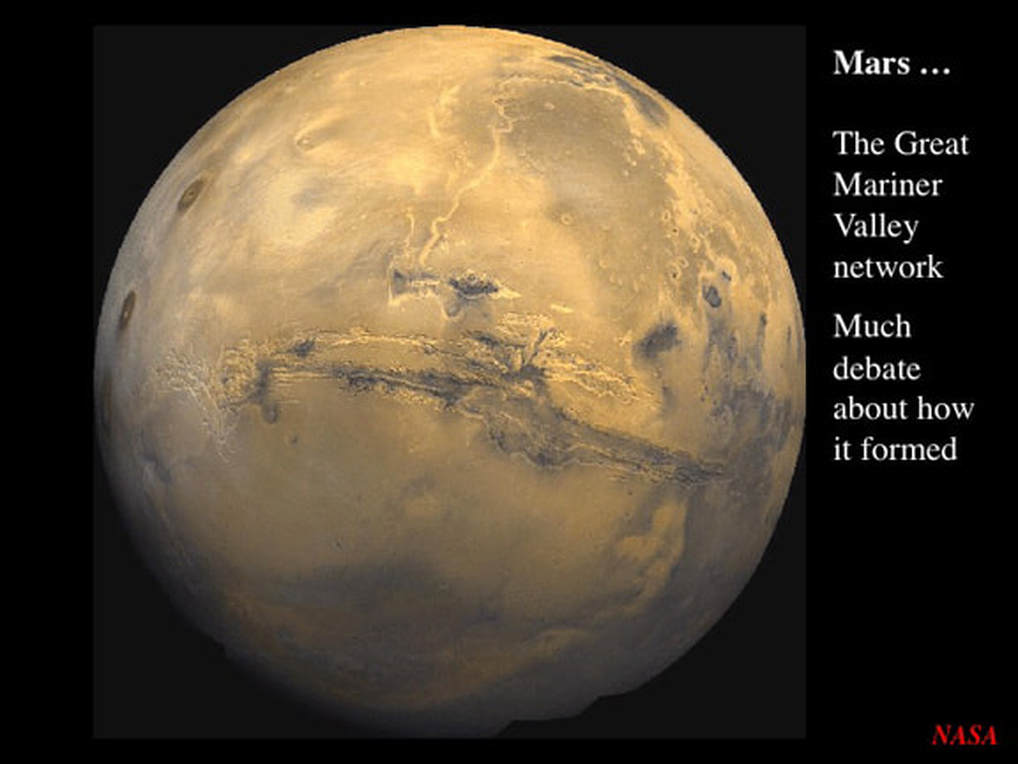 Valles Marineris, the Mariner Valley, is the largest valley in the Solar System. It is really a vast network of valleys, more or less running along the martian equator. The valley network is made of a number of parallel chasms – called chasmata – the largest and longest of which runs out to the floor of the Northern Plains via the Chaotic Terrain to the East. To the West. the Mariner Valley is bounded by the Tharsis Plateau with its three giant volcanoes. 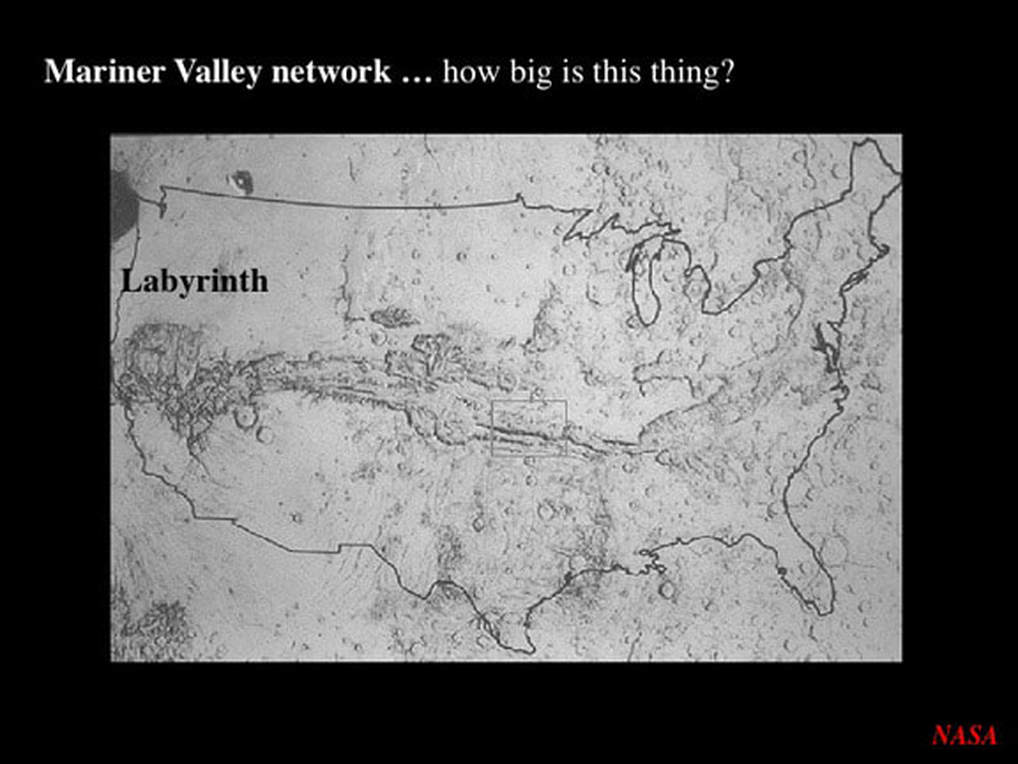 The now iconic image of the Mariner Valley superimposed on the United States gives us a sense of scale. The Earth’s Grand Canyon could easily be hidden in the western end of the Mariner Valley, in a feature known as the “Labyrinth”. With the right equipment, skill and patience, it is possible for amateur astronomers to detect the Mariner Valley, but it's not easy. However, as you'd expect, the best images of Mars come from probes orbiting the red planet - and some of the very best have been recently released by the European Space Agency (ESA). 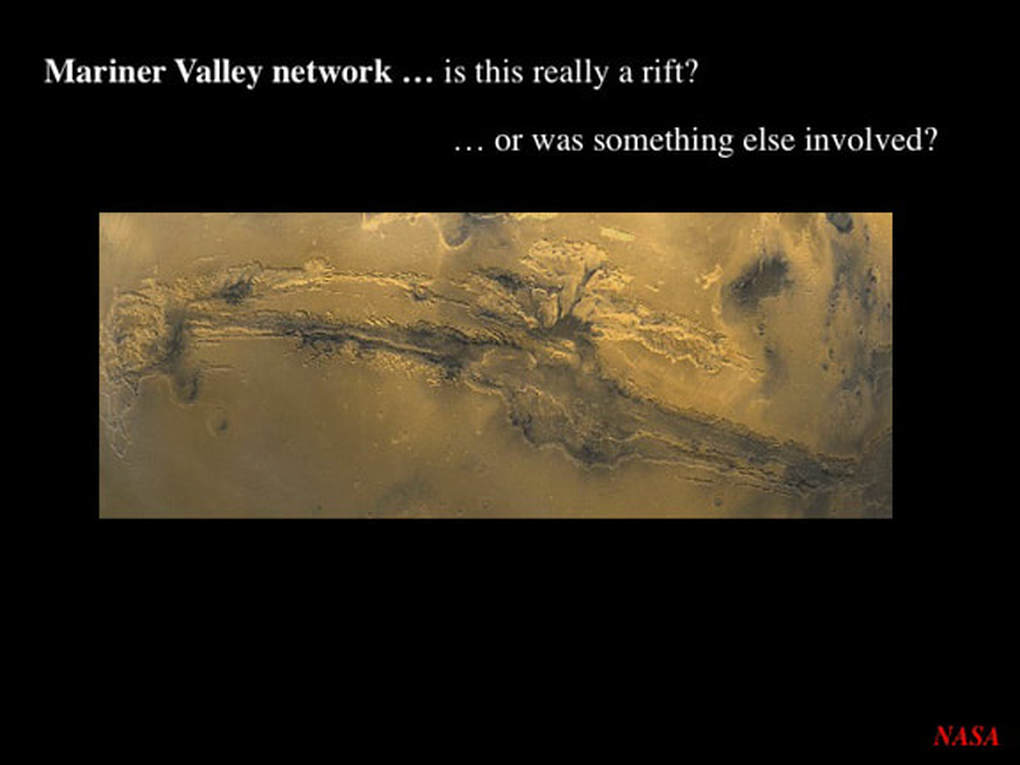 Until now, most planetary scientists have considered the Mariner Valley as a network of “rifts” that formed as the northern and southern walls of the network were pulled apart. The problem with this model is that it requires the crust of Mars to stretch. However, unless it gets shortened elsewhere on the planet – either by folding or some form of shingling – the planet would then have to expand. The trouble with this is , as Mercury has shown us very clearly, Rocky Planets shrink as they cool with time; they do not expand! Several years ago, when I presented a series of talks on Mars at the RASC (Ottawa), I tried to get around the expanding planet problem by suggesting that the Martian Valley may have started out as a sideways slipping fault network.

In either scenario, scientists were pretty much agreed that, after initial faulting, the Mariner Valley network was deepened and widened by the erosive force of flowing surface water, coupled with ground  collapse due to the melting of permafrost - and that is pretty much where things have sat until very recently. 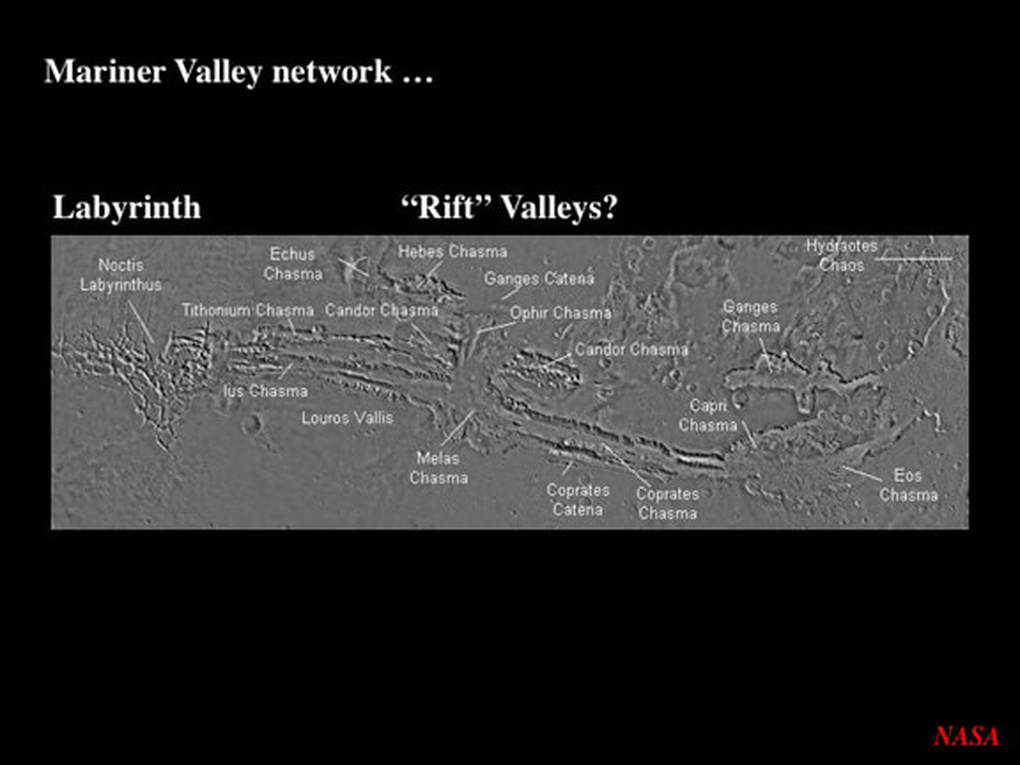 Last summer, a group of planetary scientists published a paper in the prestigious journal “Geology” that put forward a novel idea. Using images from the High Resolution Stereo Camera on board ESA’s Mars Express probe orbiting the red planet, they zeroed in on a small, but very special section of the Martian Valley network; Hebes Chasma. 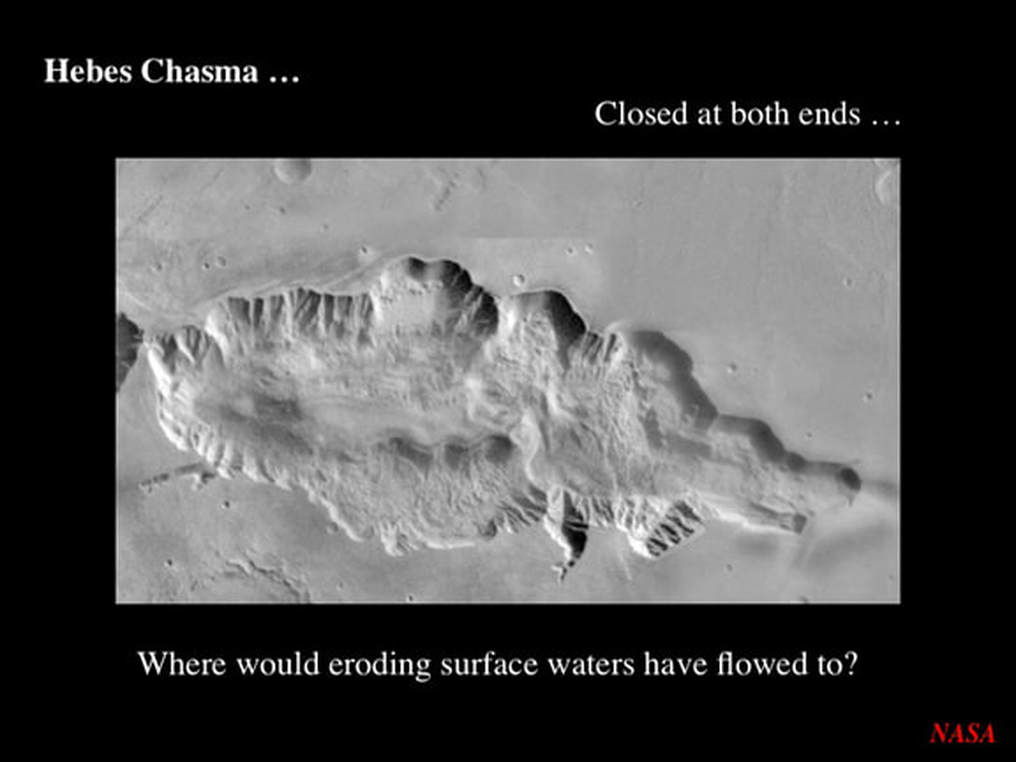 As illustrated in an older Viking image, Hebes Chasma is elliptical and quite wide given its short length. This is not the shape geologists expect to see in an immature rift valley. By way of comparison, it looks nothing like the long, skinny Ottawa Rift Valley that RASC (Ottawa) is located in, or the Alpine Rift Valley on the Moon. Even more importantly, Hebes Chasma is clearly closed at both ends, so it could not have been carved out by flowing surface waters; they had nowhere to go! So, the question is: how did Hebes Chasma form, and what might it teach us about the way the rest of the Mariner Valley network started ? 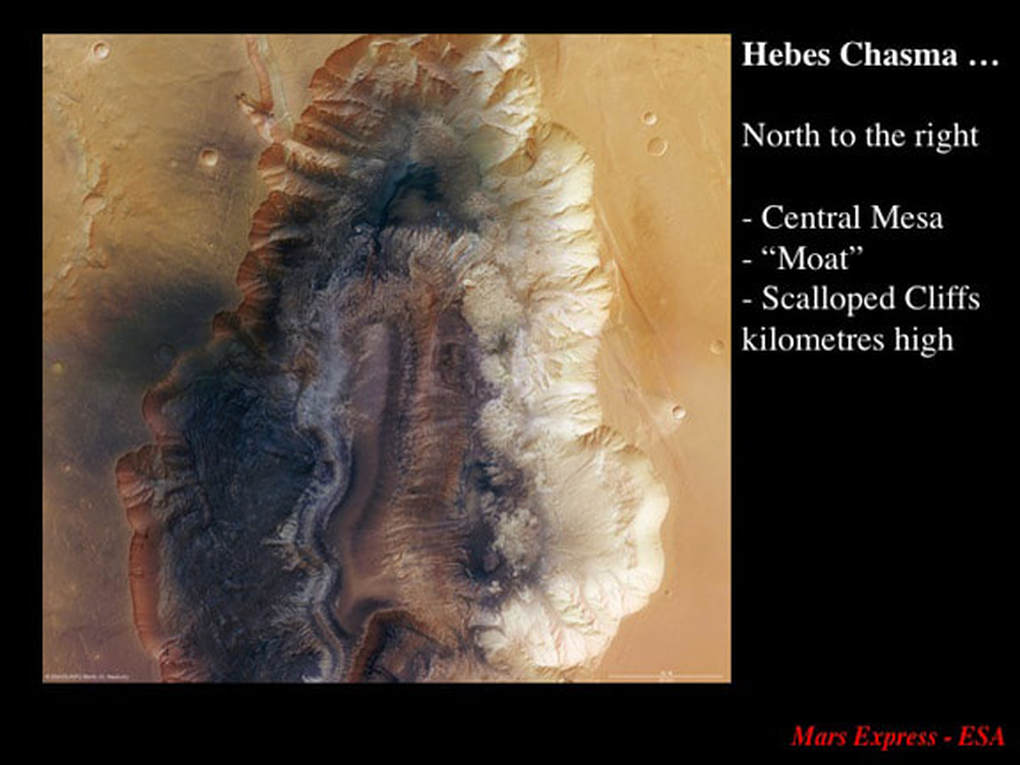 The Mars Express images of Hebes Chasma are presented with West to the top and North to the right in order to be compatible with 3D perspective images that follow here. The topography at this scale is pretty simple. There's a central mesa or plateau, surrounded by a deep, dry “moat”, all flanked by steep scalloped cliffs, kilometres high, that separate the chasma from the general flat topography of this part of Mars. 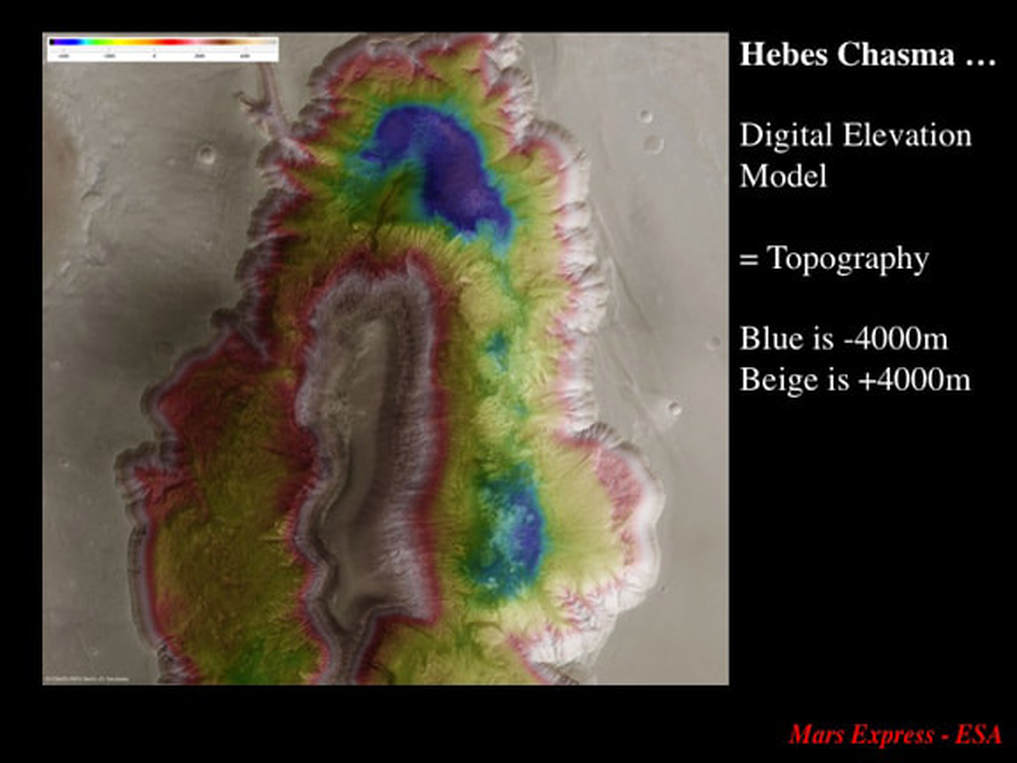 In a map of the topography of Hebes Chasma, pale colours are the highest topography. The central mesa is at the same elevation as the ground outside of the chasma, recorded as +4 km high; in other words Hebes Chasma has formed in a plateau. Blue is the lowest elevation (-4 Km), and there are two deep “pits” within the “moat” surrounding the mesa Most of the “moat” sits at the zero altitude datum for Mars, the approximate equivalent of "sea level" if Mars had an ocean. In short, most of the Hebes Chasma floor sits 4 Km below the surrounding plateau, while the pits  are up to 4 Km deeper. 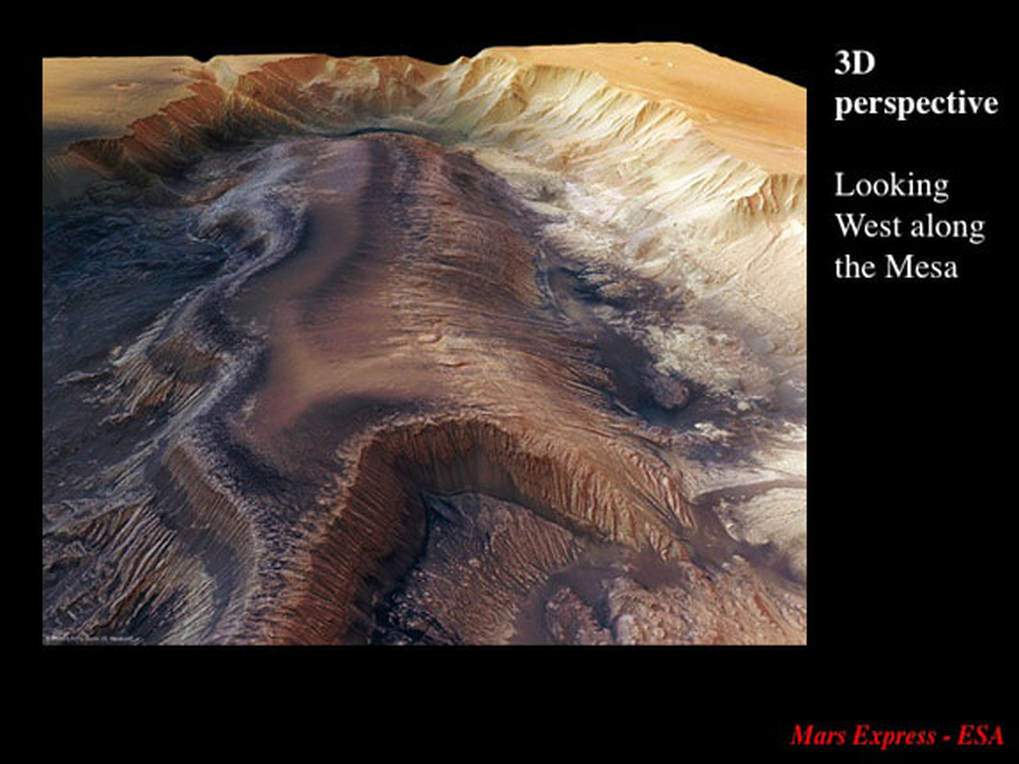 The accompanying 3D perspective images are not artist’s impressions. ESA has processed the stereo images to produce these amazing, undistorted perspectives. In the first image, looking West along the length of the mesa, the surrounding dry “moat”, the two “pits” (especially the western one), and the incredibly steep scalloped cliffs with their streaky surfaces are self evident. However, three new features are now apparent in the rendered image : 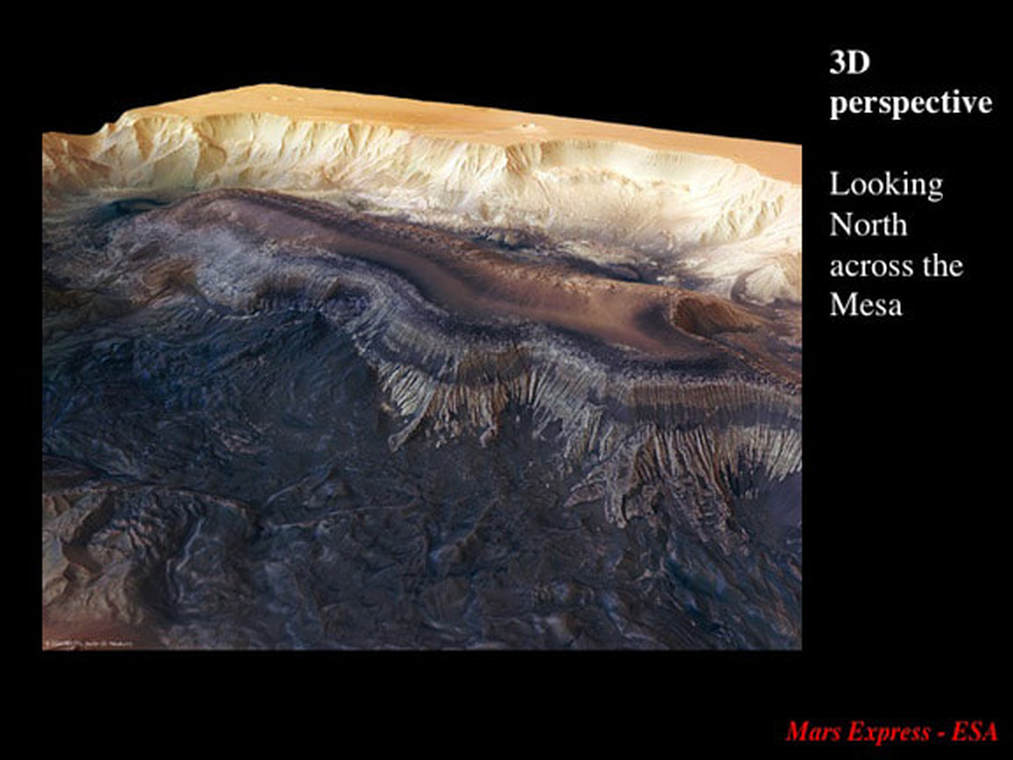 Looking North from above the south side of the chasma, one can clearly see : 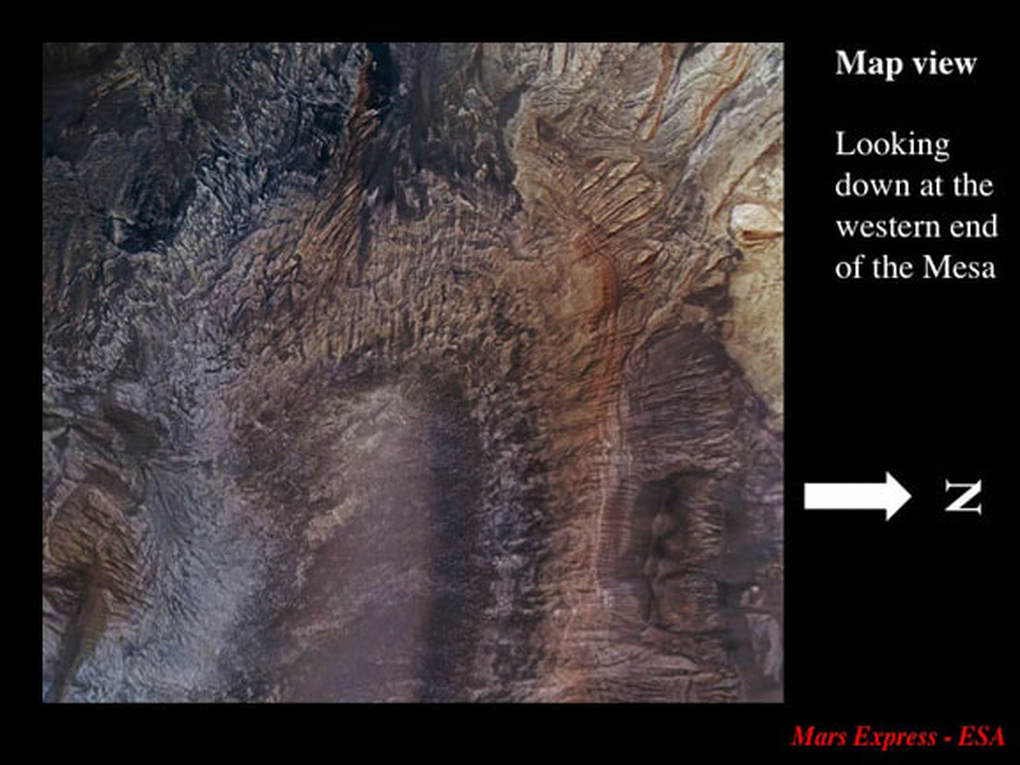 The detailed view of the western end of the mesa highlights the incredible resolution of these Mars Express images. Note (i) the detailed down-slope scarring of the walls that bound the mesa on all sides, indicative of the important role of slumping, and (ii) the very fine compositional layering in the walls of the mesa, picked out buy the various colours Again, the question: is this sedimentary ? 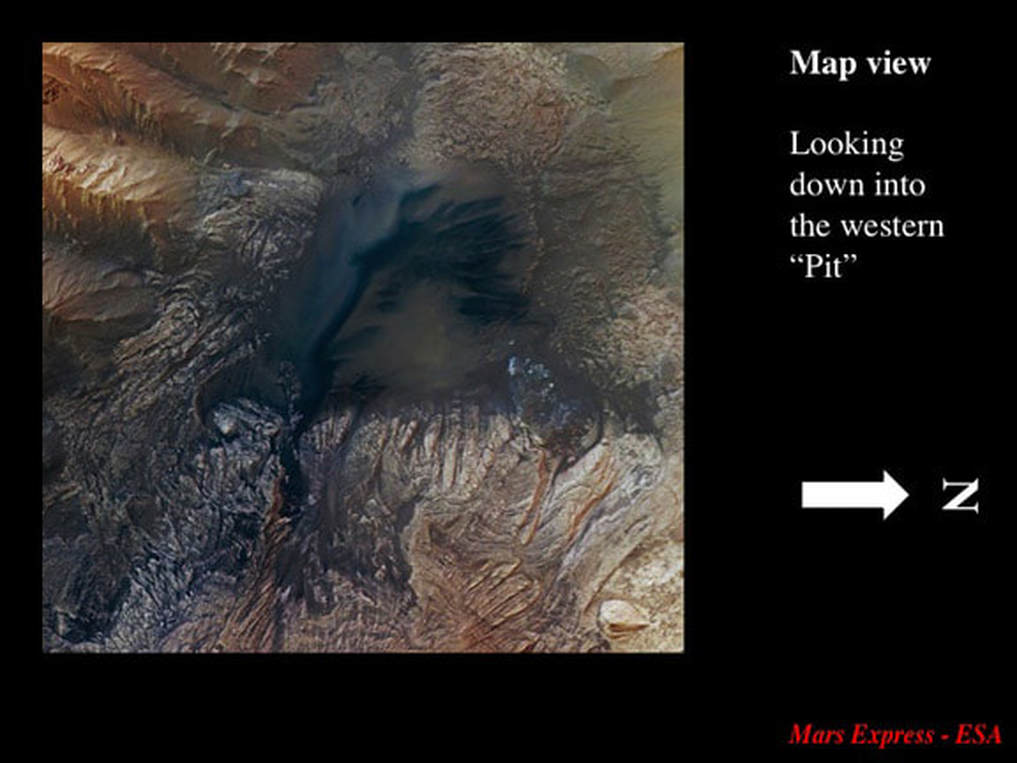 Looking straight down into the western “pit”, the dark formation, very similar to the “Oil Spill” seen further to the East, is very apparent. The smooth material on the floor of the “pit” is young sediment that lies over the older scarred, layered rocks we can still see exposed in the western wall of the mesa. 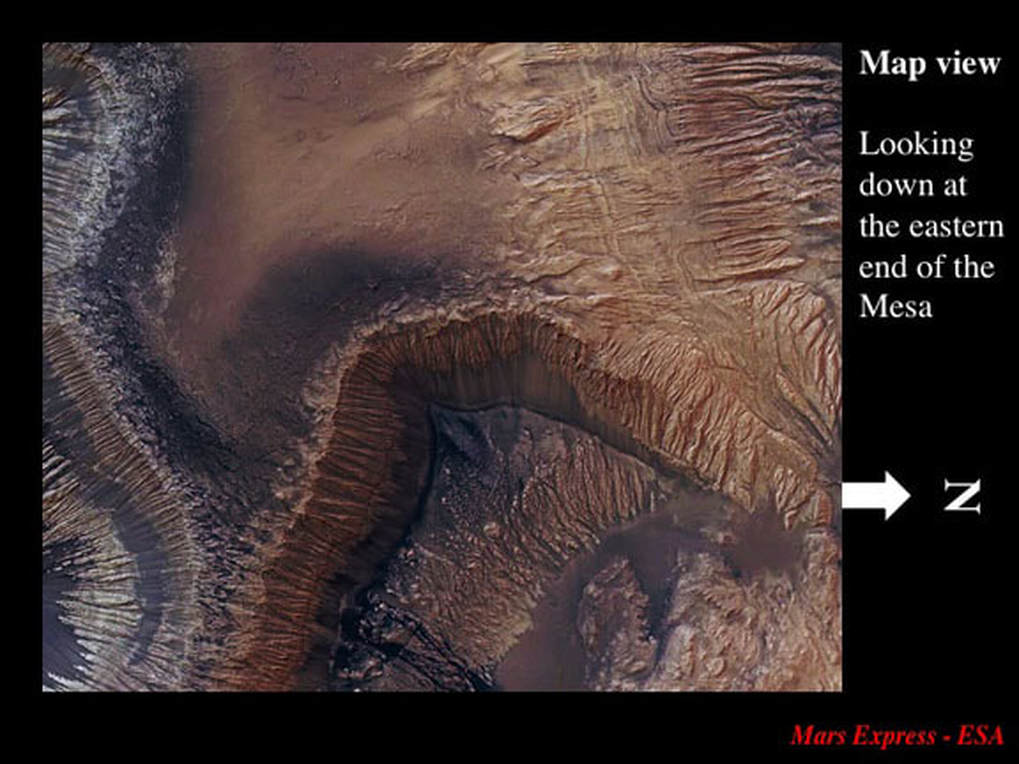 At the eastern end of the mesa, we see the “Oil Spill” located on a rubbly floor at the base of a steep scarred cliff in which we can see the compositional layering of the rocks. Here the rubbly material is clearly covered, and partially masked, by younger smooth sediment. Notice again the scarring of the cliffs that bound the mesa to the South (left), and the same scarring on the gentler slope to the North (right) 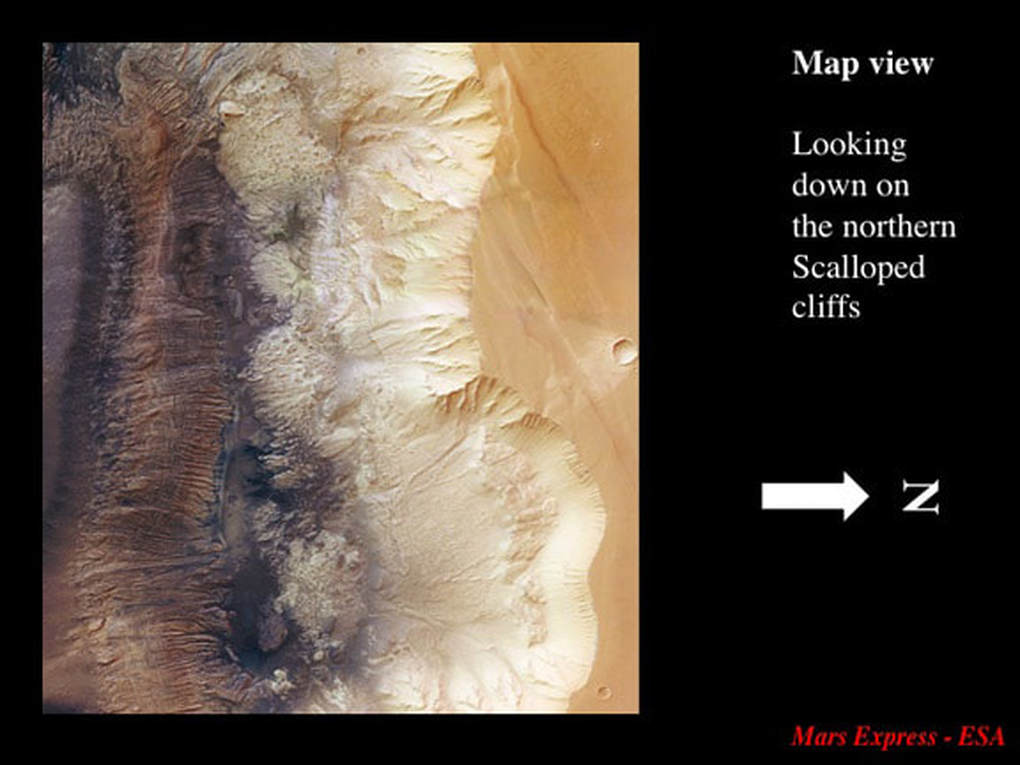 So, ESA has provided us with amazing images, but what do they mean and what do they tell us about how Hebes Chasma formed ? The scalloped cliffs are clearly the product of slumping and landslides. Note the landslide material all along the northern (right) flank of the “moat”, as well as the scar of the massive landslide that stopped halfway up the 4 Km high cliff face. 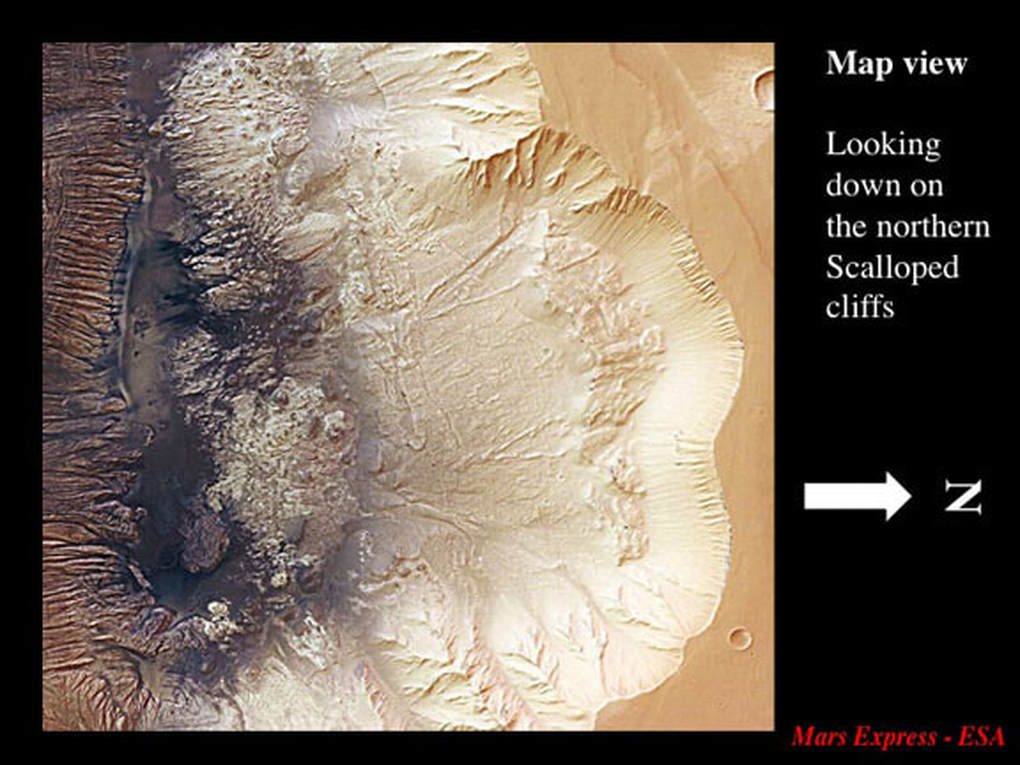 ​In a more detailed image, one can see that the rubble at the base of the cliff has flowed into the northern “pit” in the floor of the “moat”. 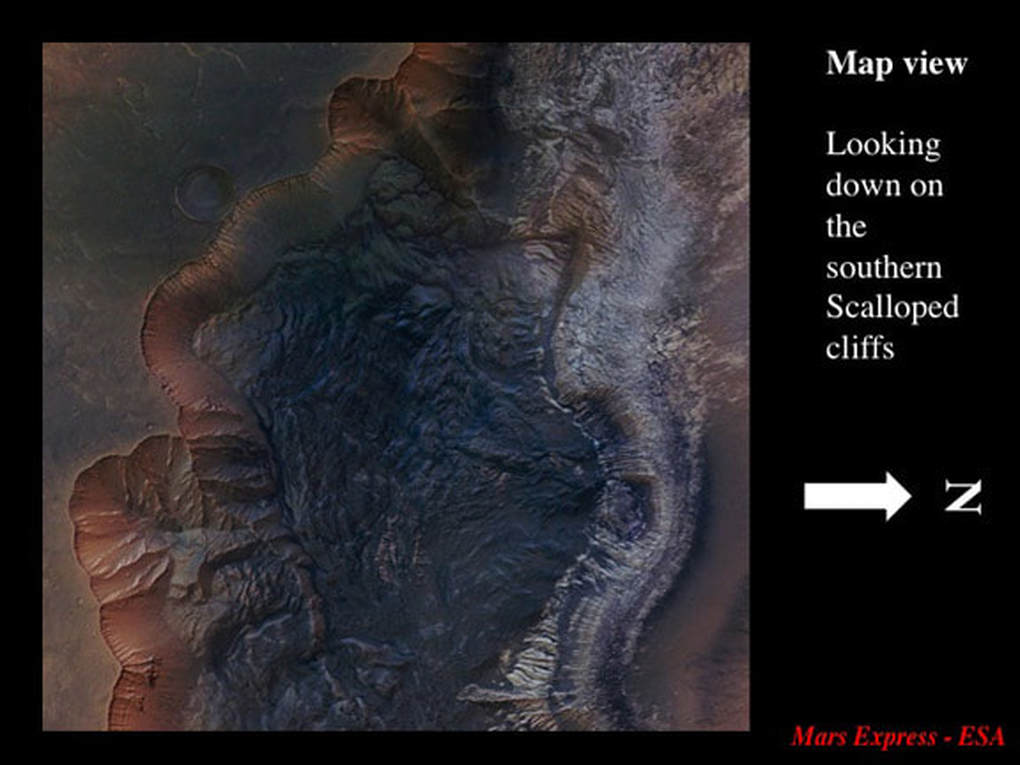 Now let's look at the south margin of Hebes Chasma. The dark rubbly material is patterned with long ridges more or less parallel to the scalloped cliffs (left) and is the product of the slumping and landsliding that produced the cliffs. Look carefully at the top of the image and you can see a small landslide that has formed a perched scallop in the cliff wall. This small landslide must be younger than the other dark material because it sits on top of and masks the ridges in the older landslide. Most importantly, notice how the dark rubble lies over and hides the mid-section of the horizontal compositional layering in the cliff wall that forms the south side of the mesa. Because it came from the left, the dark rubble must’ve flowed upslope to the right in order to do this. 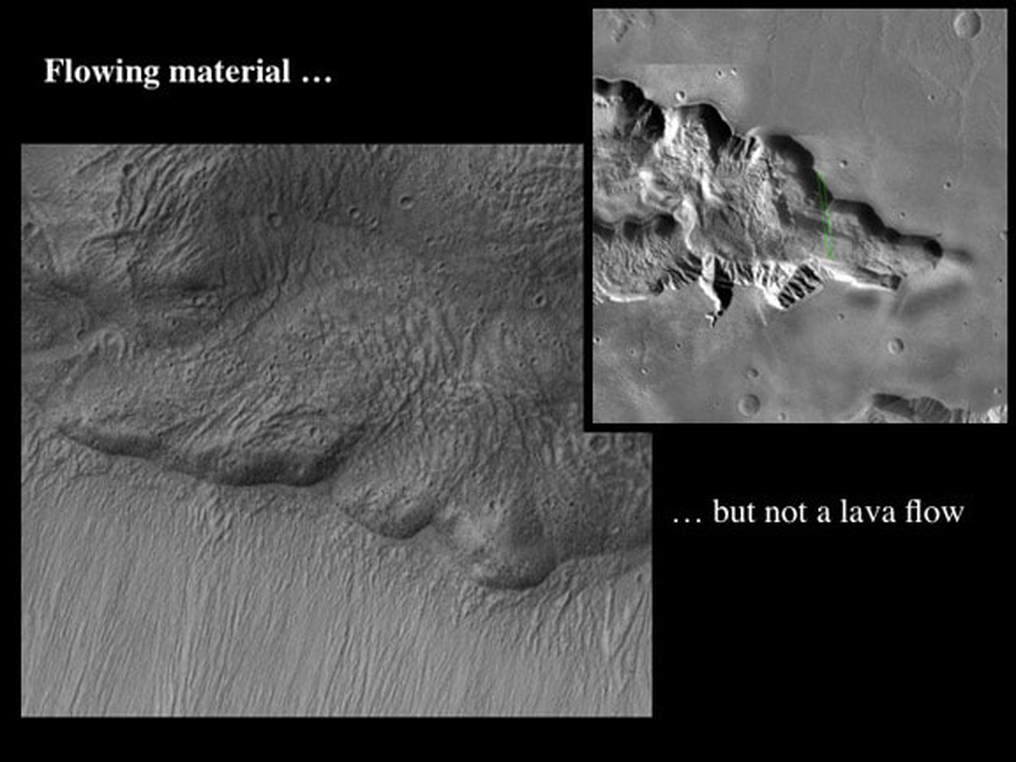 So, the initial conclusion is that the rocky material in Hebes Chasma was extremely mobile and did a lot of flowing – even flowing uphill. A detailed older image from the eastern end of the chasma shows lobes and surface ridges that make one think of a large lava flow – but it’s actually a mass of landslide material that flowed horizontally along the floor of the “moat”. 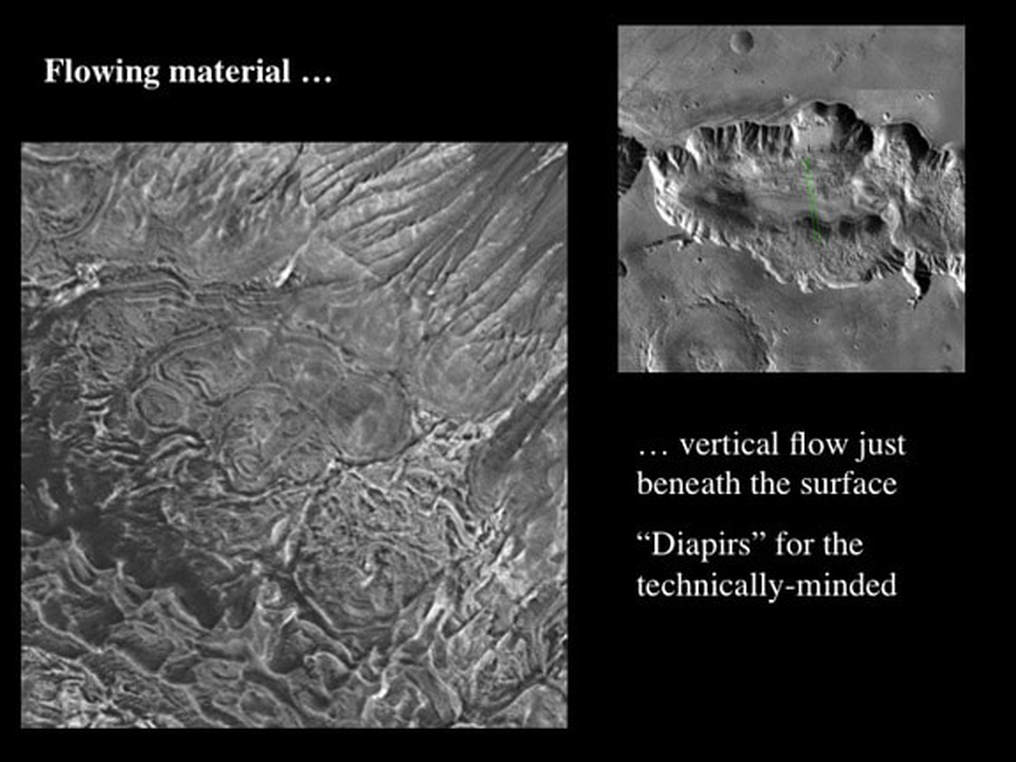 At the western end of the chasma we see a nest of circular structures observed in plan view just north of the mesa. These are cross-sections of “bubbles” and domes of highly mobile material that rose vertically towards the surface. Thus, flow was in every direction conceivable in 3D. 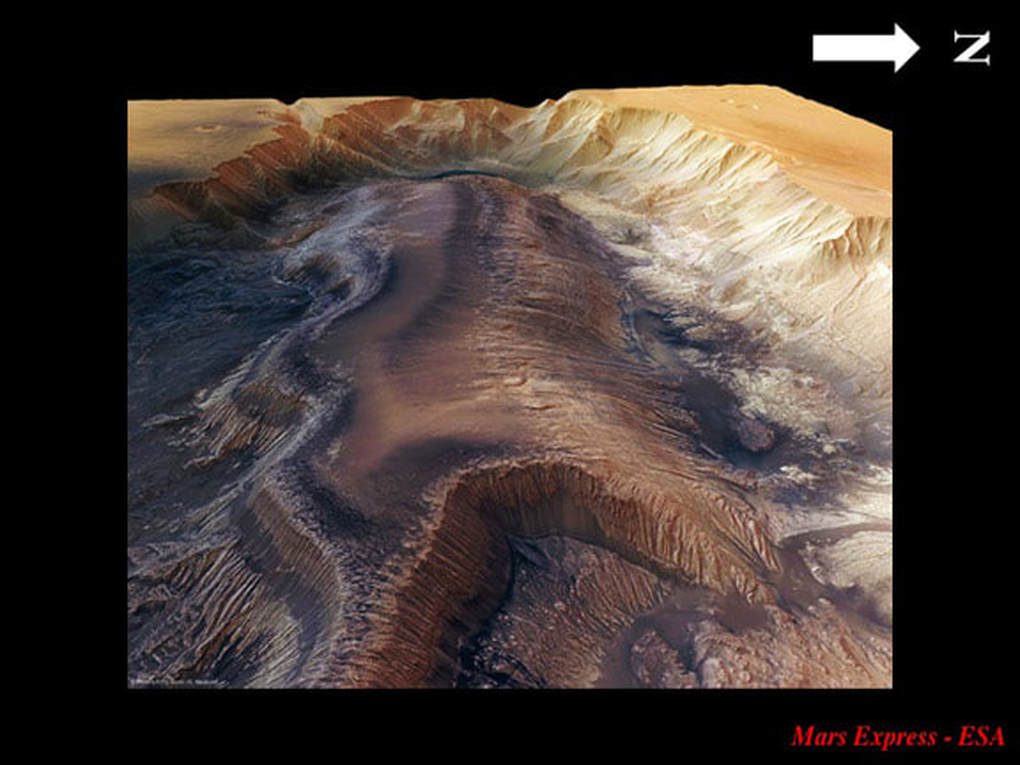 So, let’s put this together and figure out how Hebes Chasma might have formed. In order to allow material to slide down steep cliffs,  something has to remove other material to make the cliffs in the first place - or there’d be nowhere for the sliding material to go. One option is the melting of voluminous, thick permafrost, for whatever reason (global warming, subterranean injection of hot magma, etc). The problem here is that the remaining ice on Mars would not have the physical strength to maintain the steep cliffs, up to 4 Km kilometres high. But there is an alternative: salt can be highly mobile, and we know on Earth that it flows vertically as “bubbles” and domes. If the layers seen in the cliffs of Hebes Chasma are sediments deposited in water, thick salt beds may be associated with them – as here on Earth. Salt is also highly soluble and will readily dissolve in groundwater, leaving behind an insoluble residue that is commonly dark – just like the “Oil Slick” materials seen in Hebes Chasma. 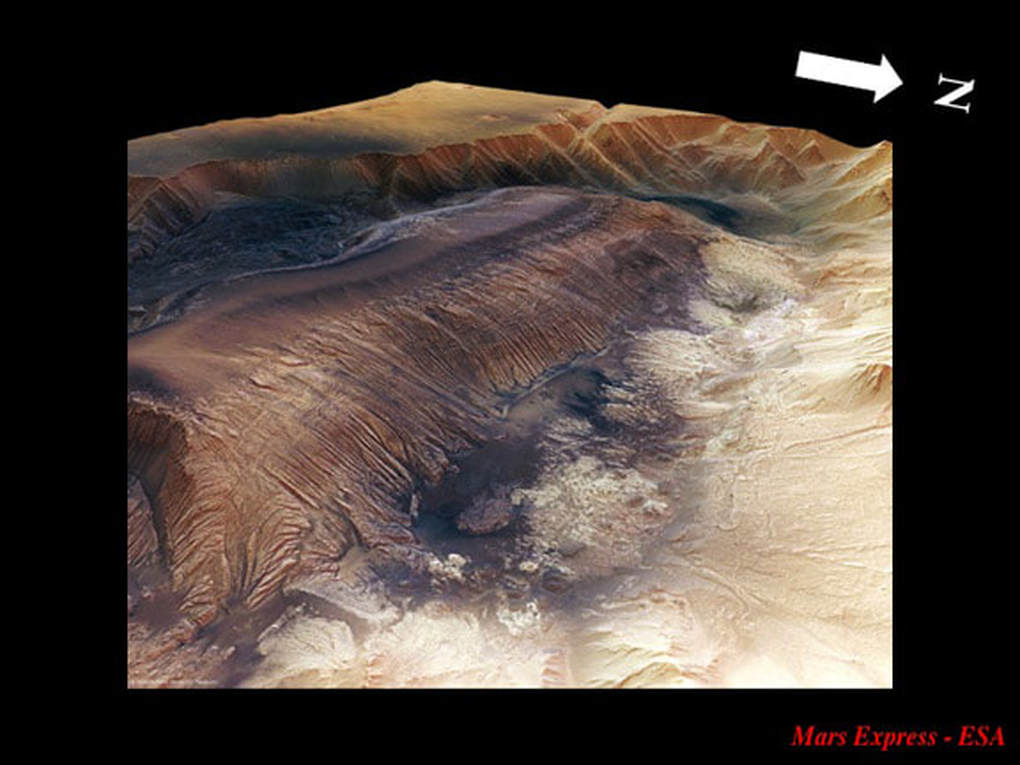 So where would the flowing rocky material and the mobile and dissolved salt go to make the space needed for the massive landslides we see on both sides of Hebes Chasma today ? The planetary scientists who authored the “Geology” paper I’ve summarised for here suggest that the missing material flowed down sink-holes represented by the “pits” we see in the floor of Hebes Chasma - epitomised by the 8 Km deep western and northern “pits”. In some ways this begs the further question about how the sink holes formed in the first place, but that’s likely to be the topic of much discussion yet to come! 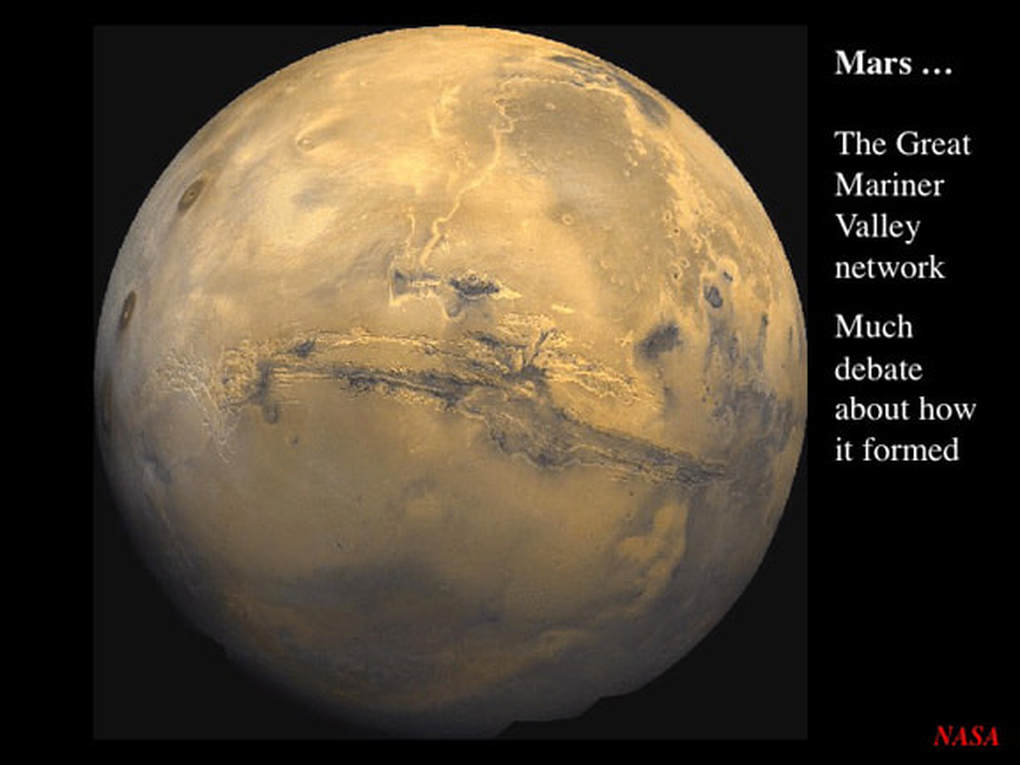 Remember that this is a hypothesis based on remote imaging. It will take more data, maybe a landing, to determine if the thick salt beds proposed are really there and if they have really behaved as suggested. Also, this hypothesis does not negate the role of flowing water in modifying the Mariner and other martian valleys. Rather, it proposes an additional mechanism that helps explain how the process of valley formation started in the first place.
back